Flippin's Evenings of the Arts 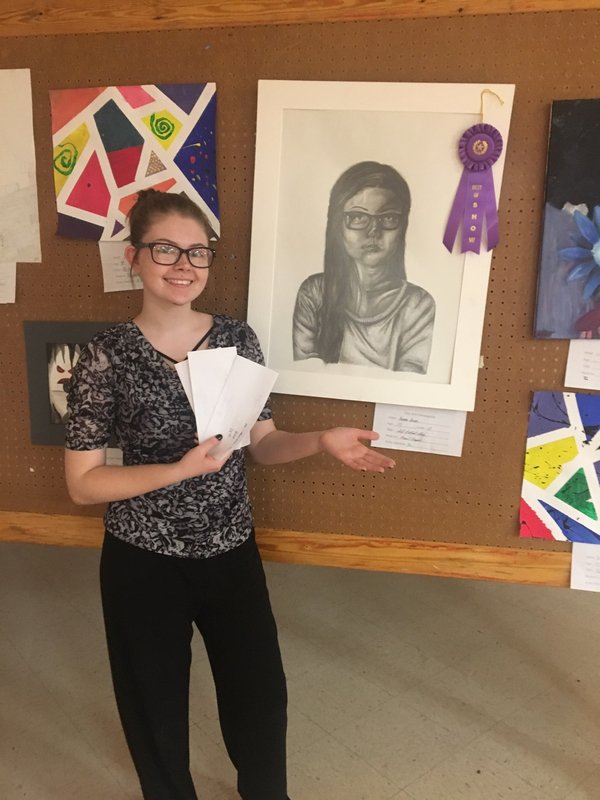 Flippin’s Evenings of the Arts

Article and Photos by Brenna Metts

Over the span of three weeks, Flippin celebrates its art community on campus in a series of events called The Evenings of the Arts. Each of the three nights celebrates its own genre of art. It all kicks off with a play put on by Flippin’s Drama Club, then the Art Extravaganza put on by the art classes, and lastly a concert put on by band and choir. The Evenings of the Arts provide students the opportunity to showcase their unique talent.

The Evenings of the Arts began on April 26 with the annual drama performance. Ali Maze is the Drama director at Flippin and gives insight into the hard work her and the students do in advance to make sure the play is enjoyable:

“Preparation for performances begin well before we ever choose a play. The group has to bond in order to trust one another for future time on stage. We work on how to walk without making noise, how to project voices and how to move around the stage to make things flow and not be awkward or clumsy. We've worked twice with Theater Squared to hone acting techniques and allow for time with professional actors. There are a lot of behind-the-scenes things that happen prior to a performance.  The set has to be built, and time has to be spent on proper arrangement for the best possible use of space. This takes several weeks. It also must be set up for the best sound arrangements. A lot of time goes into picking the best play for the team. We may read up to 20 (or more) different plays before we decide on the best one. Then we read and re-read the play in order to become completely familiar with characters and plot. Then more time is spent running lines. It takes about 3-4 weeks to block the play, which means making sure the actors are in the best places suitable for the play to look as natural as possible. We block, read scripts and rehearse for several weeks, and then we go off-script and rehearse the actual play. Costuming is time consuming because the right clothes compliment the  characters. Sometimes it's as simple as raiding a closet, and other times it's a complete redesign of something in the drama closet. This means sewing and altering- and that's my job. The sound and sound effects are another crucial aspect of the play. If sound, lights and effects are not on cue, it won't flow. Timing is everything.”

This year, drama put on a performance of the play “A Long Red Herring,” a mystery about a group of students solving a murder mystery that their professor staged as their semester final. The actors and actresses included Maria Benefiel as Kate, Clovis Jones as Bojo, Abbey Love as Didi, Toran Brown as Rudy, Kade Howard as Professor Kleine, Grace Stewart as Lynn, Gabby White as Mary Jane, and Nikki Golden as Hacker. The play was also made possible with the help of Stage Manager Ava Flippin (who also played the voice of Mrs. Kleine), soundbooth operators Cody Loskot and Zach Billiot, and lastly production crew Hope Rackley and Zeb Brown.

The second Evening of the arts took place on May 2nd with the Fine Arts Extravaganza. Cheryl Blasdel started the Fine Arts Extravaganza in 1985. It started small with a few pieces of art displayed on chairs; 34 years later it grew into something much bigger. Presently, art from all grades plaster every surface of wall around the gym. After all the art is hung by the high school art classes, the pieces await judging so the creator may be rewarded at the ceremony. This year Blasdel was able to collect $800 from local sponsors to be able to award the winning artists, more money than all previous years. Blasdel states that when she first started the program that she dreamed of it one day becoming what it is now.

The FMS winners were Samantha Lea with 3rd place, Carly Hardin with 2nd place and Dominic Sellers took 1st place with a painting of a hummingbird. The FHS winners were DeAnna Willis with 3rd place, Erin Pendergrass with 2nd place, and Cheyanne Brading took 1st place with her piece Colors of the Lion. The biggest prize of the night went to Karissa Herron who won best of show with her self portrait.

The Art Extravaganza didn’t just end with the art awards. There were also several musical performances that happened throughout the show thanks to band director, Bruce Shaver. The high school choir performed the songs “Hey Ho, Nobody Home”, “Perfect”, and lastly “Sound of Silence.” High school band pumped up the crowd with their performances of “Seven Nation Army,” “Capitol March,” and lastly “Paint it Black.” There were also a few individual singing performances. Middle schoolers Savannah Skirvin and Mary Erisman performed “High Hopes.” High schooler Railey Parnell sang “In Christ Alone” acapella. Lastly Emma Mears blew away the crowd with her singing of an original called “Dark Room” and “Love, Love, Love” by of Monsters and Men, both were accompanied with her playing of the guitar. At the end of the show Mrs. Blasdel encouraged students to “branch out” and try new things. She believes that finding a artistic hobby is important because it can stick with one for their entire life, as it has her. She emphasized that art is “not only a skill you can learn, but also a mode of expression.”

The last Evening of the Arts was the band and choir concert on May 6th. Musical Director Bruce Shaver shares the tedious process of preparing for that night:

“The process of selecting music is more detailed than one would expect.  I gather potential pieces of music from various music conferences, from fellow educators, from our current library, and from online sources such as JWpepper.com.  At this particular site, I can both search for individual music I'm interested in, or can browse based on criteria such as idiom (choir/band), difficulty, and voicing (SAB would mean music for Soprano, Alto, an Bass choir).  Then as I narrow my choices down for the group, I have to gauge if the difficulty is appropriately challenging, musically interesting, and programmatically suitable for the particular group. All this has to be done for Beginning, Junior, and Senior Bands as well as Junior and Senior Choirs!

The music then has to be prepared for each ensemble and distributed in time for them to learn it.  The most efficient rehearsals happen when I have a clear plan of attack to help them learn the piece in an efficient manner.  This includes teaching them skills they don't already possess that they need to be able to perform each piece well (each piece of course has its own particular challenges that must be addressed.)  The more dedicated our students are, the quicker this process goes! We have a great group of students in choir and band. The band and choir culture is getting better every year, and each year I see them progressing further than the year before.  Both band and choir had students place in honor choirs and bands this year! I see only great things for our future! We took Senior Band to Concert Assessment this year this year for the first time in 4-5 years, and we were pleased to have raised our scores from the last time Flippin attended.  I look forward to taking the Choirs to Choral Performance Assessment in the next few years as well!”

The concert was a big success and yielded an audience of fans that packed the cafeteria. The concert began with a rendition of the Star Spangled banner played by senior trumpeter Joshua Schade. The Junior High Choir then sang “American Folk Rhapsody,” “The Moon,” and “How Far I’ll Go.” Afterwards, the Senior High Choir performed “The Sound of Silence,” “Perfect,” and “From Sea to Shining Sea.” The two choirs then combined together to sing a beautiful rendition of “Hey Ho, Nobody Home,” “My America,” and finally “Armed Forces- The Pride of America.” The concert then shifted to the band portion of the performance and beginning band performed the pieces “Magna Carta March,” “Name Those Tunes,” “Clarinet Caravan,” and “Zombie Stomp.” Junior Band followed by playing “Aztec Sunrise” and “Mystic Legend” and then combined with the Senior band to play “Conundrum.” Senior band finalized the concert with the pieces “Crystal City Overture,” “All the Pretty Little Horses,” “Capitol March,” “Seven Nation Army,” and finally “Paint it Black.” Shaver ended the concert by recognizing his senior members Joshua Schade, Deanna Willis, and Allana Eggert. He also presented Joshua Schade with the Governor’s Award for Musical Excellence. Shaver parted by sharing the impact music can have on youth by training their brain and teaching life skills. He urges parents to show their support even when it may seem difficult to bear the squeaking and honking of their child’s instrument, because in the long run it can lead to magnificence.